Today we introduce a new segment to Curious Pages. We call it:
WHAT IN THE HECK WERE YOU THINKING?
First up, the legendary Florence Parry Heide. Ms. Heide is the author of over one hundred books for children. Some of her titles include: Fables You Shouldn't Pay Any Attention To, Grim and Ghastly Goings-On, Tales For the Perfect Child, Princess Hyacinth: the Surprising Tale of a Girl Who Floated and the forthcoming Dillweed's Revenge (A Deadly Dose of Magic) illustrated by Carson Ellis.
Arguably, her most famous books are those from her Treehorn trilogy illustrated by Edward Gorey. Unlike many picture books from this era, these books were odd, deadpan, surreal and sophisticated. So we ask: Florence, just what in the heck were you thinking? 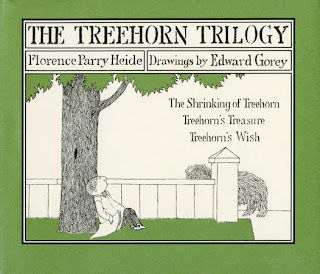 MS. HEIDE RESPONDS: I remember the way it was, way-back-when.  And when exactly was way back when? 1970. (This is about THAT time and then I expect I'll just keep typing away as I think other things...) Wasn't it just yesterday?  I'd had many rejections, but look! I'd sold a few books, too.  My first book,  MAXIMILIAN,  for example, after sixteen rejections.  Sixteen! 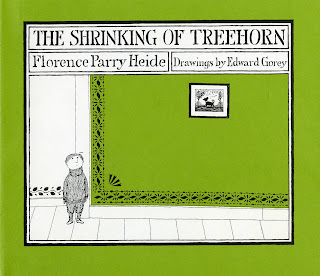 So the fact that THE SHRINKING OF TREEHORN had been turned down a few times was not
dismaying to me.  But wait a minute!  Look what's happening!  It's been accepted, by Holiday House! That by itself was enough to make my head spin, but now look: Edward Gorey was to be the illustrator!  Edward Gorey, whose work I had so admired, was to illustrate one of my books!


And now: I was to meet him.  I, Ms Plain Vanilla, was to meet the famous and fabulous Edward Gorey: John Briggs of Holiday House had so arranged.  We were to sign copies of the newly published THE SHRINKING OF TREEHORN.
And there he was: be still my heart. He asked me to call him Ted. Edward Gorey asked me to call him Ted! He gave me a beanbag frog he'd made on which he'd stitched: I have turned green.
We were instant friends, lifelong friends.  Each time I came to New York, and in those days I was a frequent visitor,  we would see each other, have lunch, talk. And talk. 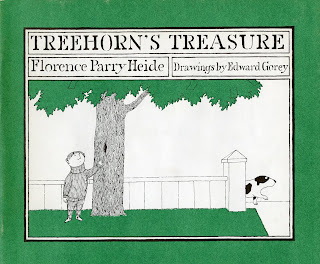 Would I write  a Treehorn  sequel?  Oh, good, of course:  TREEHORN'S TREASURE.  He loved it. John Briggs loved it.  And each time Ted (!) and I saw each other, he assured me that he'd start working on it very soon.

Very soon turned out to be nearly ten years. 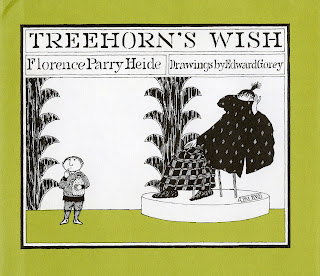 But  the moment it was published,  he asked me to write a third Treehorn. What? and wait ten years? No, no.  He promised that if I would write it, he would start and finish it immediately.  So: I did and he did. And now we had TREEHORN'S WISH.

He had felt that with three Treehorns an animated feature would soon follow.  Sorry about that, Ted, but: never say never. 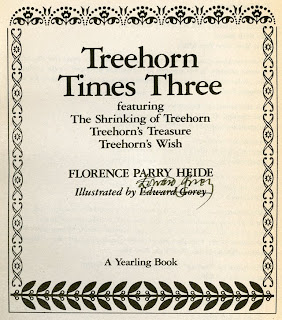 See? once I start thinking of him I can't stop. Those were wonderful times. I used to stay at the old Royalton,  which was not at all like the new Royalton.  It's across from the Algonquin.  He still lived on 38th Street.  He'd come over and we'd walk to lunch. He walked everywhere. And we'd  talk. And talk.  We'd planned to write a murder mystery play with my brother, David, an Agatha Christie kind of play- and  -- 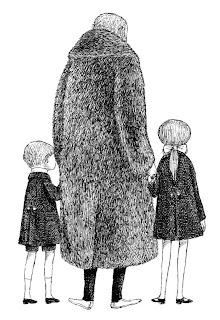 You've seen pictures of him . . . very tall, a white beard, wonderfully blue, blue eyes that really DID twinkle - blue jeans, sneakers, and although he used to wear fur coats he stopped doing that out of reverence for animals.  He told me, though, that he'd saved them all, had put them in storage, he had loved those fur coats.
Oh,  I was to tell  you how I thought of the story of Treehorn? . . . this is how it was---

I was ready to write another story and was sitting at my typewriter ---but look at the time! it's nearly noon, and my five children would be rushing in for lunch any minute now--in those days, kids came home from school for lunch.  So I was rushing to fix something for lunch when: in they came.
"Can Mike come for dinner tonight, could you call his Mom right now?"
"Look, I skinned my knee, I need a bandaid!"
"I have to have a quarter for class dues!"
And more.  And all at once.  And I realized that I was saying "That's nice, dear,"  to each one. And then I thought that I'd probably been saying that every day for ever and ever. And because I had been looking for an idea for a new book, I thought what about a mother who keeps saying That's nice, dear, no matter what's happening. So: something really surprising happens to a boy and his mother just keeps saying things like, That's nice, dear. What might that surprising thing be?

That afternoon a neighborhood boy came to the door. I hadn't seen him all winter, and  I found myself saying, "My, how you've grown, Richard!" and then I thought: Oh, for heavens sake, of COURSE he's grown, don't sound so surprised. Surprised would be if he'd grown smaller.

So I wrote THE SHRINKING OF HAROLD.
I'd just finished it when my mother came over for coffee. She was always interested in what I was writing, so I handed it to her to read.  She liked it, but said, "But why do you call him Harold, dear? That's a nice name but the other names you've used have been more. . . dashing."
I thought of that as we visited: she'd had lunch with Mrs Hale and Mrs Afton and Mrs Treehart and-- Treehart, Treehart.  What about: Treehorn?  So Treehorn he became.

I was telling that story to a third grade class one day and a boy asked, "So then why didn't you dedicate the book to that Mrs. Treehart?" . . . 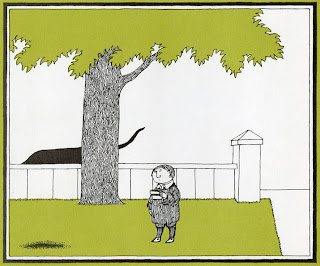 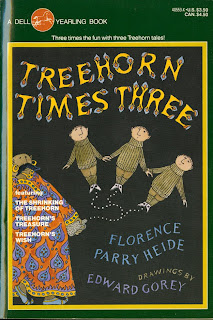