By Anton Chekhov and Gennady Spirin, 1994 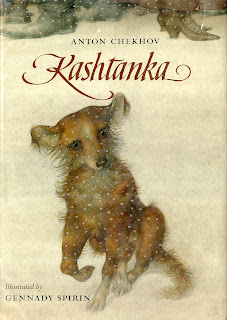 The story is simple: a dog gets lost, adjusts to her new home, is found by her old owners, goes happily back home.  Like so much of Chekhov’s best work, it has the pace and emotional range of real life: no great villains, no great heroes, everybody trying to do his or her best.  Neither master is an abusive brute.  The dog is a small but pleasant part of both their lives.  The first master is a woodcarver.  The second trains domestic animals for a small-time circus act.  The woodcarver is a bit cheap with the food, and stamps his feet now and then, but, in his favor, he has a son, and his house smells like woodshavings  and glue.  The animal trainer is a happy Falstaffian guy with a genuine affection for animals, who chomps a cigar, probably drinks a bit too much, has the occasional fling, when he can manage it, with the less-pretty of the three acrobats.

There is essentially no real drama.  The dog will be fine either way, we sense.  She is not traumatized by being lost – the way a dog would be in a lesser story, in which the writer would feel more compelled to anthropomorphize her – but adjusts quickly to the world in which she finds herself.  Mostly, she smells things.  There aren’t any bad smells, just less-interesting ones.  Likewise, when her old owners come to the circus and reclaim her, she goes along happily, and by the time they reach home, she has all but forgotten her time with the circus, which “seemed no more than a long and confusing dream.”
Kashtanka is, it seems to me, the most accurately drawn dog in literature.

The emotional highpoint of the story – its great tragedy – is the quiet death of a goose.  (This results in a haunting image of said goose, stretched out on a dimly lit wooden floor, eyes closed, the shadow of a window frame cutting across its long neck.)  As the goose dies, the household cat comes to sit with the dog, “for the first time since they’d known each other.”  The dog licks the cat’s paw and “without even asking why” the cat had come over, “began to whimper.”  In the background of the illustration of the dying goose, we can see this pair.  Are they bereft?  No, this is Chekhov: they have nodded off to sleep. 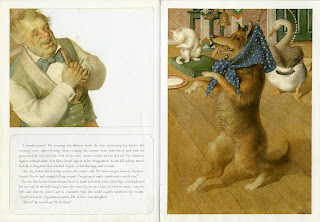 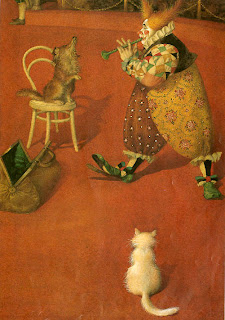 Spirin is the perfect illustrator for Chekhov.  His work is realistic and rich in detail (the book opens with three gorgeous though understated Moscow street scenes) but also allows for a bit of Dickensian exaggeration (in Kashtanka’s madly proud dog-grin, in the way the imagined detritus of the wood-carving life almost crowds the animal-trainer out of the frame as Kashtanka longs for these familiar smells of his old home).  Spirin is particularly wonderful with faces: the woodcarver looks a bit like Tolstoy, if Tolstoy were poor and had a touch of poverty-induced meanness about him.  The circus-master is overweight, jolly, has no anger in him, drinks too much, has (we posit) a ratty collection of sleeping gowns, of which he is inordinately proud.  In the circus crowd that hands Kashtanka back to his real owners, we see: a burly Russian soldier, a rat-faced middle-class fellow (who I somehow know is both near-sighted and judgmental; a fan of whatever political theory is newest) and a pretty young woman, in a veil, rapt with emotion: she takes this incident as proof of certain romantic beliefs, i.e., in her world, lost dogs are always found. 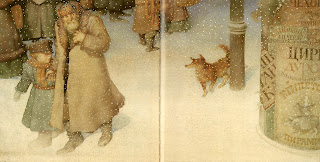 Whenever I read Chekhov now, I picture the characters as Spirin might have drawn them: full of life, their spiritual attributes abundantly present in their faces. 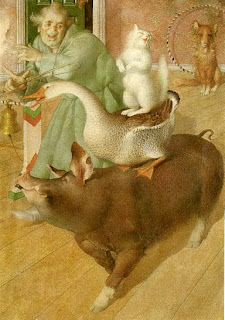 These days, in my own work, I’m trying to strike a balance between the delights of realism (a bigger and more physical world, sensuality, verisimilitude) and those of a more exaggerative approach, an approach that comes more naturally to me and enables (in my work anyway) what feels like more ferocity and abandon, and a higher, darker type of truth.  Reexamining this book has been interesting: Spirin seems able to have it both ways.  He shows the (very real) scuffed boots of a musician in a Moscow regimental band, as well as a delighted-looking cat riding on the back of a nervous-looking goose riding on the back of a pig clearly beaming with pride.